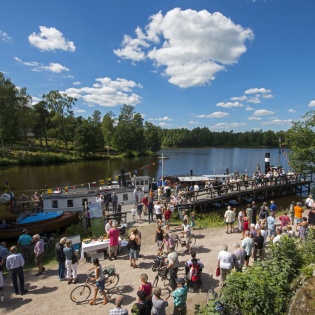 Current hallstahammar municipality was formed in the year-end 1970/71 by merging Hallstahammars town and Kolbäcks rural municipality. The new municipality had about 19 000 inhabitants, which was then estimated to increase to 25,000 around the year 1990. But in the 1970s and 1980s came the decline of industry (steel crisis) that led to a decline in the population and today is the population figure of nearly 15600 (7830 women and 7766 men). In 2005, the population of 14955 inhabitants that since then steadily increase, albeit at a modest pace. Nearby Västerås population development also benefits Hallstahammar. Today ther is a housing shortage in the municipality.

The strategy, ambitions, Objectives and work in the community in regard to safety.

The main objective in this work is that Hallstahammar municipality should be a safe community to live, reside and work in. The safety promotion and injury prevention is an important part of the long-term public health work as practiced in Hallstahammar municipality in order to create the favorable conditions for safety and quality of life for locals. Primarily, it is of course to reduce the human suffering caused by accidents, but an important part is also the great social costs of accidents that comes with it.

Accident prevention in the municipality based on the indicators for a safe community. Among other things, an infrastructure based on the participation of citizens led by an interdepartmental group is required. This group consists of Hallstahammars case of the Council for Safe and secure municipality. The same cross-sector solution is also the case in all the working groups linked to this work. Some examples of councils and groups working to achieve enhanced safety and security of Hallstahammar municipality;

putting up curtain rails to prevent falls in the elderly.

The strategy is to focus on identifying and restricting different risk factors in the community, but at the same time promoting various protective factors in both society and for the individual. The focus is on preventive measures that will lead to (target):

To read more klick on the "Hallstahammar doc."

Designated 2017 as nr 379 in the International Safe Community succession