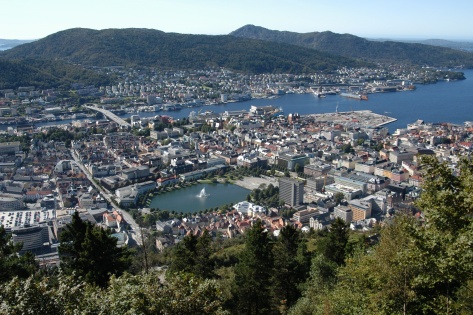 Bergen, Norway- Application to Become a Member of the Safe Community Network

For the age group
Children 0-14 years:
Information given at Child Health Clinics and from Public Health Nurses to parents about home, leisure- and traffic safety. Different kinds of written information material are produced and delivered out. The Health Clinics also informe about safety equipment and how to obtain them.
Day-care centers and schools are required to have safety routines, fire drills and carry through safety practice concerning both their own facilities, buildings, equipments i.e. Traffic safety is an important issue from 1. grade. Equipments such as reflecive vests and caps are handed out, and the young pupils are trained how to behave in the traffic.
Dangerous places on the school way are registered and efforts are carried out. To use a bike to and from school are allowed from 4. grade. Helmets are required.

Youth 15-24 years:
Several campaigns and programmes concerning youth are developed.
The main issues are preventing drug-use, violence, vandalism, traffic safety i.e. and the efforts to make the youth themselves organizing drug-free arrangements and different kinds of meeting facilities such as skate halls, youth clubs i.e.
There are established six youth-councils which aims are to act as a contact body between young peoples organizations and municipal entities, and to promote positives activities in local communities.
The local police has organised preventive work geared towards children and young people in its youth section.
Cooperation on local crime prevention are organized through interdisciplinary and cross-sectoral groups in each of eight city districts. There are 20 active volunteering nightraven groups in Bergen to create safety for everyone in the local area, especially for young people who are out at night.
The municipality of Bergen offer health service for young people through six health centres for young people.

Elderly 65+ years:
The home-based care service for elderly people maps the individuals mobility and needs for technical aids. A checklist has been made for home visits. Nursing homes keep a record of near-accidents and accidents that occur to the residents. Nursing homes also have their own procedures to prevent residents falling from chairs.

At the following environments:

Home:
- Public Health Nurse are given information to parents when they have new-borns through home-visits and consultations.
- Discussions with parents take place four times after the first home visit with a view to informing them about the risk of accidents in relation to the child´s development, reviewing checklists, and talking about different kinds of equipment.
- To prevent injuries and accidents among the elderly who live at home, measures have been implemented through the “Safe Home” project aiming to reveal and prevent injuries and accidents.
- Personal safety in the event of fire in sheltered housing – houses for residents who need nursing and care – are carried out in an interdisciplinary project. All new sheltered housing are now equipped with sprinkler systems and automatic fire alarms to ensure adequate personal safety.
- As part of the Safe Home project, a position as a safety nurse was established in Laksevåg city district to serve those over 80 who live at home and who do not receive services from the district. The safety nurse maps the general health condition, mobility, network, risk of accidents in the home, need for technical aids etc.

Traffic:
In the endeavours to attain the zero vision with regard to traffic accidents, the Norwegian Public Road Administration and Bergen municipality have set up a project called “30-zone Bergen” and a demonstration project for the environment and safety at Landås. Reducing the speed limit and constructing “sleeping policemen” or traffic-calming measures in the whole of the city centre have produced positive results. The Landås project has provided useful input for evaluating relevant strategies and the potential of a residential area with regard to accident reduction, improvements to the traffic environment and resident participation.
Many primary schools are located near main roads that have very heavy traffic. To reduce the risk of accidents involving schoolchildren, the Public Road Administration in cooperation with Bergen municipality has reduced the speed limit 30 kilometres an hour, and has combined this with constructing “sleeping policemen” on many of the nearby main roads. Bays have also been built at many of the schools where parents who drive their children to school can drop them off safely.
Bergen has many tunnels on its main roads. Since 2002 the Public Road Administration has systematically upgraded the tunnels in Bergen where accidents most frequently happen and which have heavy traffic. The required emergency telephones have been installed as well as fire extinguishers, flashing red lights, and rescue and radio communication equipment. Some tunnels have also been equipped with new barriers and fireproofed PE foam with concrete.
Since 1989 the Norwegian Air Ambulance in Hordaland county (cooperating since 1997 with the police) has arranged an annual traffic accident prevention campaign for pupils in upper secondary schools in Bergen and the neighbouring municipalities. The annual event takes place in collaboration with the main board of school leavers and a head teacher group, and the pupils are under the obligation to attend meetings.

School:
Environment-oriented health care through the health care authority has for many years worked on preventing accidents, particularly in day-care centres and schools. The regulations relating to environment-oriented health care in day-care centres and schools etc. came into effect on 1 January 1996. The regulations aim to ensure that environments in day-care centres, schools and other enterprises promote health, well-being and good social and environmental conditions, and prevent illness and injury.
Through the “Safe Schools” project, a system has been compiled for recording injuries and accidents to pupils. The purpose is to identify preventive measures and to develop internal control procedures at each school. To increase the well-being and safety of each individual pupil during his/her schooldays, action plans against bullying and problem behaviour have also been drawn up. Participation in the so-called Olweus programme against bullying and violence is one of several such measures.

Sports:
There are programmes aiming safety promotion in sport areas and children playgrounds. As a special project, the local ergonomics and physiotherapy service participates in an annual resource week at Bergen’s Minde school.
The resource week method entails ensuring that physical activity and pleasure in exercise are integrated as a natural part of the academic content in the second year of schooling, and that children who need special follow-up in the area of motor function are well cared for in the framework of their normal school day. Several schools from a number of places in the country have visited Minde school and have learnt this method. The Department of education and sports also have started projects aiming physical training for children with overwight.

Leisure:
The Bergen Red Cross is running a project on active leisure time as a service for people who have managed to give up intoxicating substances or who are in a process of rehabilitation assisted by medication. The active leisure project aims to promote network building and to bring former addicts out of isolation through activities, excursions and social contact with others.

The goal is to create a more positive daily life through activity. The clients of the project get to know new people, or maybe even come into contact with people they knew before. The activities are organised by both the project’s clients and voluntary helpers. The volunteers can also assist with daily tasks or can provide support in other ways. The service is free.

Other:
Instruction in use of fire-fighting appliance for all schoolchildren at the age of 12.

Violence prevention:
To prevent violence and other criminality in restaurants, bars etc., a collaboration involving the restaurant sector, Bergen municipality’s office for licensing matters and the police initiated an approval scheme for doormen and a course for doormen on handling critical situations. Campaigns were also implemented against theft at such locations. Young people were given information in various places on the consequences of forging identity cards. The police have recently observed a marked decline in the number of such cases.

Suicide prevention:
Work has been carried out at Haukeland University Hospital on preventing suicide attempts among young people by identifying risk, ascertaining early signals and making referrals to the appropriate body/follow-up. On 2 February 2005 at the Department of Child Psychiatry at Haukeland University Hospital, 400 people took part in a one-day seminar on these themes. This shows there is a great interest in acquiring more knowledge about holistic treatment for suicidal tendencies among young people.

There is a need to enhance the skills of the various specialist groups that are in contact with young people who are at risk of injuring themselves, to assure the quality of interdisciplinary procedures that can help to standardise the clinical work, and to prepare an overview of measures, projects, hospitals and both private and public organisations that provide activities for this group.

Programs aiming at ”High risk-groups”:
Levelling out living conditions to create safe communities have been the starting point when Bergen municipality – in cooperation with the police, housing associations, residents’ associations and the private sector – actively established local community projects in areas that have an obvious accumulation of disadvantages with regard to living conditions and the local community.
In an specially area that has large-scale challenges in terms of living conditions and the local community, the project “Starting life without intoxicants” is targeted at pregnant women who abuse drugs and alcohol. The objectives of the project are to install helping measures as early as possible to prevent or reduce injury to the foetus at the same as giving pregnant women a starting point for a positive development process for both themselves and their child.
As an initiative for families in a vulnerable situation who have small children the Church City Mission has set up the local community project Ada. In collaboration with Bergen municipality, Ada runs an open day-care centre, the so-called “teddy-bear den” and home-start family contact. In addition a new centre for immigrant women is to open in 2005.
Interdisciplinary and cross-sectoral groups have been set up in each of the eight city districts. These groups collaborate on crime prevention measures. They are composed of representatives from education and sports, health and social affairs, cultural affairs, child welfare services, health centres, Educational-Psychological services, the police etc. The objective of the groups is to spearhead the collaboration between the various services in the area on crime prevention measures. They also aim to give continuous attention to individuals and groups who need interdisciplinary endeavours and to keep updated about what is happening in the various areas of service so that information and experience can be exchanged.

Information about risk for falling for elderly. Intervention has been taken through home visits for example by removing potential obstacles in the home, having eye tests, reviewing medication and carrying out strength and balance exercises for those who need them. To prevent the need for help and to postpone institutionalisation, the most important target group will be elderly people living at home. The eronomic- and physiotrherapy service have together with daycentres projects with the aim to rehablitate elderly through different physical and social activities.

Surveillance of injuries:
Registration forms for use in day care facilities, schools an homes for elderly.
Registration of near-accident/accident that occur to residents at nursery homes.
Research reports
Developing a registration system for the municipality.

Steen, Knut og Hunskår, Steinar, Violence in an urban community from the perspective of an accident and emergency department: A two-year prospective study. Med Sci Monit 10/2004.

- Information materials will be produced for the 14. International Conference on Safe Communities in Bergen in June 2005.

Designated 2005 as  nr 84 in the International Safe Communtiy succession